with loft and roof deck × 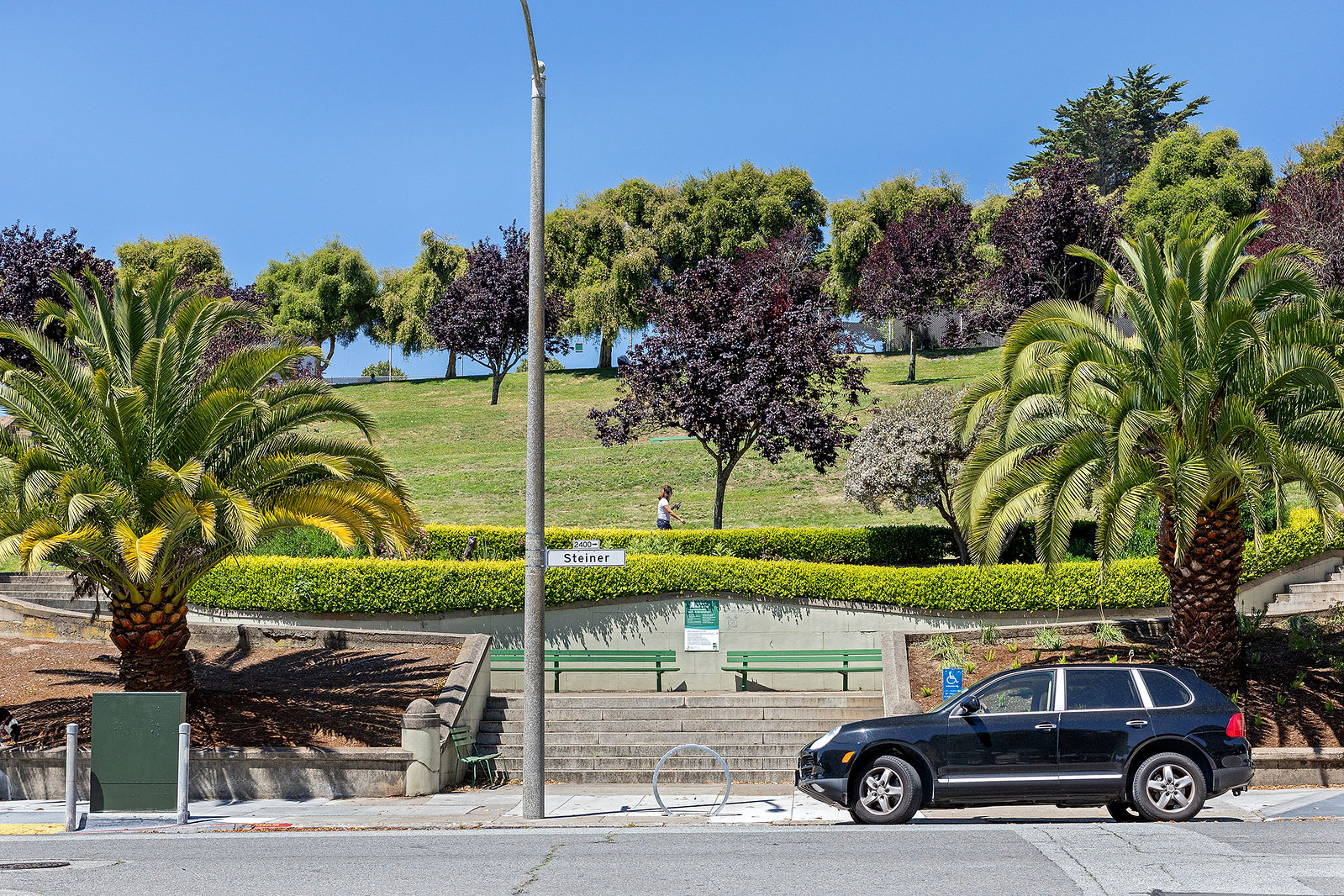 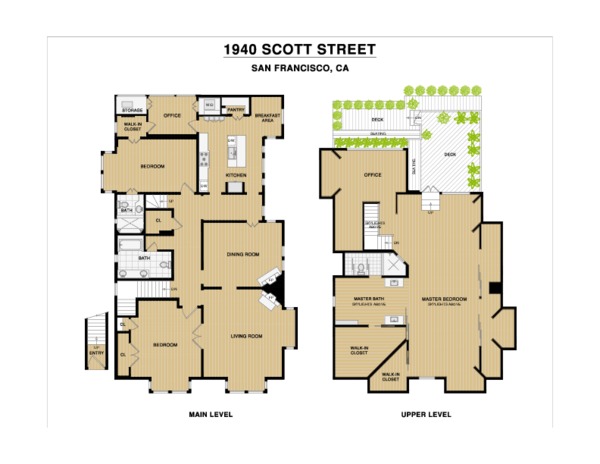 The main level includes the west facing large living room plus den/double parlor or bedroom. Also here is a formal dining room plus an expansive kitchen with breakfast bar and bay, a home office plus a guest bedroom suite as well as a full bath off the extra-wide hallway. Elegant period details include hardwood floors throughout, high ceilings, ornate trim and two fireplaces.

The top level is a wonderful surprise, with a lofty peaked roof and skylights this addition has taken advantage of every inch of space, creating an expansive primary bedroom suite and family/media room, and also includes a nursery/office/yoga room. The principal bath features double wood vanities, a large walk-in closet plus dressing area and a stunning Bizazza mosaic tile walk-in shower. Clever built-ins allow for additional shelving and storage. Off this great room, through patio glass doors, lies the spacious Ipe deck complete with wind screens, built-in bench and planters. City views, privacy, and sunlight from the south and east make this roof garden an ideal urban retreat.

Amenities include central forced air heating, overhead lighting, on-demand hot water, in-unit washer and dryer. The modern chef’s kitchen gets dazzling morning light through a breakfast bay surrounded by windows and includes a counter bar plus lots of cabinetry and work space plus a built-in pantry as well. Extra storage on the entry level.

Nearby neighborhood shopping areas include always-bustling Fillmore Street, with its boutiques, restaurants and services, as well as the neighborhood commercial blocks of Divisadero and Sacramento Streets. Laurel Shopping Center, Whole Foods and Trader Joe’s are nearby. Just a couple of blocks to Alta Plaza Park, with playground, tennis courts, dog run and an enviable view of the city.

Multiple local schools and houses of faith, UCSF-Mt. Zion and California Pacific Medical Center are all nearby. With arguably the best MUNI line in SF running along California Street, as well as car share and tech shuttles, this location provides for an easy alternative commute to downtown, the bay and Civic Center.

Pacific Heights is home to some of the past and present wealth makers in business including Silicon Valley’s most prominent players. New and old business founders have all made their homes in what is considered one of the most upscale neighborhoods in the United States.

This majestic section of San Francisco houses some of the largest homes in the city, including a wide array of Victorians, Edwardians, Mission Revival and homes in the style of French Chateaux and Italian or Spanish Villas. An affluent neighborhood, Pacific Heights is home to the several consulates including Germany, Greece, Italy, Portugal and Korea. Several elite private schools in the area were once former mansions. Among these are Town School, Convent of the Sacred Heart, Stuart Hall High School, San Francisco High School, and Drew School.

Although Presidio Park and all it offers is nearby, the neighborhood features two lively parks of its own: Lafayette Park and Alta Plaza Park. Lafayette Park offers beautiful grassy hills, a playground, and an off-leash dog park, while Alta Plaza is perched even higher with bay views, tennis and basketball courts, children's play area and winding paths.

When Pacific Heights residents are looking for a place to dine, they usually make their way to Fillmore Street for notable local restaurants featuring happy hour, a variety of flavors, fresh daily specials and multiple coffee and dessert houses abound. Shop at Mollie Stone or Laurel Shopping Village for cooking or catering at home.

Fillmore Street as well as Sacramento Street are both great places to enjoy a day of shopping and entertainment with elegant world class boutiques and fun night life venues.

Locals and tourists are often amazed at the variety of landmarks and attractions you can find in Pacific Heights. Enjoy a guided tour through the Haas-Lilienthal House, an excellent example of Victorian architecture, or check out the McElroy Octagon House on the second Sunday or second and fourth Thursday of every month.

Lower Pacific Heights offers home buyers a stylish neighborhood with an approachable, casual attitude. Within  these blocks, you'll find Japantown, the oldest and largest such enclave in the United States. The center mall is a mecca for all things Japanese. From the spectacle of the Peace Plaza pagoda to the grandeur of St. Dominic Church's flying buttresses and the massive dome of Sherith Synagogue, it really seems there's something here for everyone. This area is a shopper's delight, with bustling commercial centers along both Fillmore and Steiner streets.

Kabuki Cinema is a welcome addition to the neighborhood screening first run features and hosting events. The neighborhood is home to an interesting mix of classic Victorian homes and mid-rise condo or apartment buildings.

As throughout much of the city, you'll find wonderful diversity among your neighbors. You can get a sense of community that exists in this pocket of the city each April during the Cherry Blossom Festival or during the summer Fillmore Street Fair. Freeway access has been greatly improvedthanks to the completion of the Octavia corridor freeway entrance, opening the area to south and east bay commuters. If you like the Northside life, Lower Pacific Heights is a great place to experience.

The Duplex at 1938 and 1940 Scott Street in San Francisco, California was built in 1890 for Henrietta H. Morse to designs of architect Joseph H. Littlefield. Owned by Dr. John F. Morse, he later built several homes here. Consistent with the period, it is an example of tranistional Stick Victorian with a roofline in the Queen Anne style.

Dr. Shumate’s family referred to this location as “the picnic block,” because when they built their house at 1901 Scott in 1870, this land was vacant, and they used to have picnics there. The western portion of this square block was owned about 1875 by the widow of Dr. John Frederick Morse (1815-1874), pioneer Sacramento physician and founder of the California State Journal of Medicine. Caroline Morse was an emancipated woman for her day; she had crossed the plains to marry John Morse in Sacramento. They came to San Francisco in 1863, where he again took leadership roles in medicine and Masonry. By 1876 Caroline Morse and her medical student son John were living in the large one-story and basement Italianate house at the southeast corner of California and Scott, on the “picnic block.”

The son John Frederick Morse, Jr. (1857-1898) became a noted surgeon. He trained at the Medical College of the Pacific and received his doctor’s degree from the Frederick Wilhelm University of Berlin in 1881. He worked as visiting surgeon at San Francisco General Hospital for six years, walking the seven miles to his duties. From 1883 until his death Morse Jr. was surgeon to German hospital, now named Ralph K. Davies. He also headed the out-patient department of Cooper Medical College (site of the Pacific Campus of California Pacific Medical Center) for a while, and presided over the San Francisco County Medical Society.